The Truth About Omega 3, Fish Oil and Heart Disease

Fish oil is under the gun yet again.

Despite the truth or lies behind these accusations…

…the first question to ask should be, is fish oil really all that healthy to begin with?

Omega-3 supplements, including fish oil, flax seed oil, and many others sources have been highly touted and marketed for their “potential” benefits to heart health as well as a number of other health issues.

Because of this, millions of people around the world have been vigilantly consuming Omega-3 supplements believing that they are the key to keeping their heart healthy and saving them from heart disease.

But a more recent study has demonstrated (yet again) that Omega-3 supplements DO NOT provide any benefits when it comes to heart disease.

While this is quite a controversial topic, you deserve to know the truth.

So, before you wake up and pop your morning fish oil pills, or down the latest and greatest Omega-3 concoction on the market, thinking that your staying one step ahead with your health, take a look at the results of this latest Omega-3 study:

Conclusion Overall, omega-3 PUFA supplementation was not associated with a lower risk of all-cause mortality, cardiac death, sudden death, myocardial infarction, or stroke based on relative and absolute measures of association.

While many may be led to believe that this study is ground-breaking news, I’m sorry to say that nothing could be further from the truth.

There have been numerous studies in the past that have shown the same exact results, just like this one:

“Omega-3 fatty acid supplementation, as practiced in this cohort, provided no significant benefits to CHD risk among study participants.”

Or here’s a few more just in case you’re still in a state of disbelief:

n–3 Fatty Acids and Cardiovascular Outcomes in Patients with Dysglycemia

Conclusion Our meta-analysis showed insufficient evidence of a secondary preventive effect of omega-3 fatty acid supplements against overall cardiovascular events among patients with a history of cardiovascular disease.

Conclusions Low-dose supplementation with EPA–DHA or ALA did not significantly reduce the rate of major cardiovascular events among patients who had had a myocardial infarction and who were receiving state-of-the-art antihypertensive, antithrombotic, and lipid-modifying therapy.

Adding Fuel to the Fish Oil and Heart Disease Fire

The association of increasing dietary concentrations of fish oil with hepatotoxic effects and a higher degree of aorta atherosclerosis in the ad lib.-fed rabbit.

I could go on and on with more and more research but I think you understand the point that I’m trying to make.

So, now you might be asking yourself… how the heck did all of this happen?

The honest and sad truth is that companies push poor and oftentimes skewed or illogical studies that promote the far-fetched “potential” benefits of these supplements.

They do this while spending large amounts of marketing dollars to make sure you only see these supposed beneficial “studies”, and so that you never see the studies that might tell a different story.

Now, I don’t recommend the use of Wikipedia when researching for 100% factual information, but it should throw up some red flags when even Wikipedia is denouncing the health benefits of Omega-3’s by using the following statements to describe the various supposed health benefits…

“…does not appear to affect this risk…”

“Evidence does not support…”

“Although not confirmed as an approved health claim…”

“Although not supported by current scientific evidence…”

“…there is limited evidence that may be useful…”

To top it all off, this is followed by a list of known adverse effects, many of which are the same exact claimed “benefits” that the Omega-3 Industry is trying to promote, such as Omega-3’s causing an increased risk of stroke.

See it for yourself: http://en.wikipedia.org/wiki/Omega-3_fatty_acid

As you can see, Omega-3’s and fish oil are being marketed for all kinds of “potential” benefits for which there is no sound research to offer as legitimate proof.

What you have to understand is that the Omega-3 and Fish Oil Industry is a mega multi-billion dollar industry. 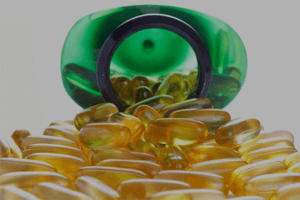 And money talks a lot louder than anything, especially research that could threaten an industry’s profit margin.

Many people want to believe that the Natural Health Supplement Industry is really interested in your health and would never deceive you.

But honestly, this industry isn’t much different than the pharmaceutical industry in that they too are more concerned about profits than your health.

Drug companies, seeing the potential money they could make, sprung into action because they too wanted a piece of the fish oil pie.

This is what prompted the drug company GlaxoSmithKline to buy out and market the fish oil medication Lovaza, which just happened to rake in a modest $916 million last year.

Now the drug company, Amarin Corporation, wants in on the deal and is about to release its own fish oil “medication” called Vascepa, which is going to be heralded as an even bigger and better fish oil supplement than all.

There are a lot of very honest and well meaning doctors, practitioners, and healthcare providers who truly want the best for you and your health.

But, unfortunately, they too buy into the media and marketing hype of these products and supplements without taking the time to look at ALL of the research.

And because of this, they jump on the bandwagon without ever realizing that they could be causing more harm than good.

If you learn anything from this, hopefully it’s that you have to be in control of your own health and make the right decisions for you, based on what you believe is right and not what you read in some health magazine or see in some media spotlight on some popular TV show.

My only goal is to open your eyes and show you the other side of the Omega-3 and fish oil story that you haven’t seen, so that you can make the informed decision and do what you believe is right for you and your health.