2 Iodine Rich Foods to Avoid (Toxic for Your Thyroid)

Is all this talk about iodine causing thyroid problems really just a bunch of BS?

Well, according to a few readers it is.

Last week I posted an article about the dangers of overdosing with iodine supplements.

(Note: If you missed it you can find it here.)

Well, it must have struck a chord with some iodine supporters out there… because I received some pretty opinionated email responses.

Here’s what one reader had to say…

This info is BS.

You can’t overdose with the diet Americans eat today. The Japanese consume way more than what is considered our daily allowance. No side effects there.

Sent from my iPhone

No, this isn’t the first time I’ve heard this myth and odds are you’ve heard it too.

But here at Forefront Health we don’t buy into myths and assumptions, especially when research says otherwise.

Don’t worry, we’ll put an end to the Japanese myth in just a second.

Yet, these responses just go to show you that there are some pretty big misconceptions about iodine out there that really deserve some more attention.

The honest truth is that we don’t only have to be concerned about iodine supplements today.

We also have to be concerned about the iodine in our food.

How Much Iodine Are You Getting?

Of course, there is a lot of variation from person to person with respect to the amount of iodine people consume on average per day.

There are certainly some people who are truly deficient in iodine although this is quite rare today.

Seeing as how the recommendation for iodine is currently 150 mcg per day, it should be easy to understand how one can effortlessly achieve the recommended amount.

Below are a list of some common foods and their iodine content which can give you a better idea of how much iodine you are getting in your diet:

Getting enough iodine in your diet is oftentimes achievable in a single meal.

This is without the inclusion of additional sources of iodine that most people are exposed to on a daily basis such as iodized salt.

Play It Safe By Avoiding These 2 Iodine Rich Foods 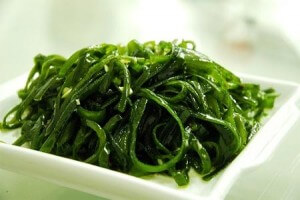 The idea that seaweed, kelp, and other sea vegetables are rich in iodine and therefore must be healthy for your thyroid has led many to label iodine-rich foods like seaweed as super-foods.

Seaweed is even making it into the mainstream American diet with the emergence of various packaged seaweed snack packs available at just about any health food store today.

But the extremely high iodine content can quickly become counter-productive for your thyroid.

Many types of seaweed provide as much as 4,500 mcg of iodine per ¼ oz., which is 30 times more than the recommended daily allowance.

Oftentimes we look at the Japanese as the epitome of health and blindly assume that they consume large amounts of seaweed and iodine and have no thyroid issues.

Yet, here’s an interesting research study showing quite the opposite.

This one shows that regions of Japan with higher iodine intake have a drastic increase in the prevalence of hypothyroidism and thyroiditis.

And the more iodine they consume, the worse it is.

Association between dietary iodine intake and prevalence of subclinical hypothyroidism in the coastal regions of Japan. 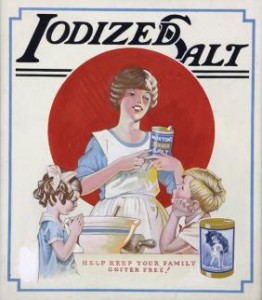 Do you think that iodized salt is protecting you and your thyroid?

Maybe… if your idea of protection is thyroid cancer and Hashimoto’s thyroiditis.

And considering that Hashimoto’s thyroiditis is believed to be the most common cause of hypothyroidism today… it makes you wonder if iodized salt could play a big role in that.

During the mid to late 1800’s iodized salt was beginning to be used to reduce the prevalence of goiters (enlarged thyroid gland) in many countries.

During that time, iodine deficiency was a much bigger issue.

But as you can see by simply looking at the table above, referencing the iodine content found in common foods today, iodine deficiency is not as common you as might think.

Seeing as how as little as ¼ tsp. of iodized salt provides almost your entire recommended daily allowance of iodine, it should be easy to see how the use of iodized salt can have quite the dramatic effect on your daily iodine intake.

There are numerous long term studies showing the negative effects of introducing iodized salt to populations believed to be iodine deficient.

And they consistently show increased rates of thyroid cancer and thyroiditis.

“In conclusion, silent iodine prophylaxis has resulted in the elimination of iodine deficiency in Greece, and this has been accompanied by an increase in the prevalence of autoimmune thyroiditis.”

“These results, in agreement with other studies, support the view that an increased iodine intake is associated with an increased incidence of papillary carcinoma of the thyroid and thyroiditis.”

Thyroid cancer and thyroiditis in Salta, Argentina: a 40-yr study in relation to iodine prophylaxis.

It is also well known that hypothyroid sufferers lose sodium rapidly through their urine.

Because of this, your need for salt (sodium) increases when you become hypothyroid.

However, increasing your use of iodized salt only further compounds this problem and increases your risk of iodine toxicity.

This is one reason why it is advisable to get your iodine from other dietary sources and to avoid iodized salt altogether. 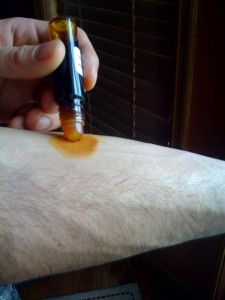 Many practitioners who support using high doses of iodine for hypothyroidism also push various tests to determine your potential for iodine deficiency, most of which have been proven to be scientifically invalid.

One such unscientific test that has gained popularity is the iodine spot test.

The claim is that you can tell if you are iodine deficient by painting a spot of iodine on your skin. If it disappears quickly then this is believed to be a sign of deficiency.

However, this test holds no scientific basis.

As Dr. Raymond Peat points out…

Iodine is converted [by the skin] to colorless iodide by reductants, including vitamin C, glutathione, and thiosulphate.

Of course there is always the possibility that you could truly be iodine deficient and if you do suspect this, then do yourself a favor and get the proper testing you need to be properly diagnosed.

Measuring your iodine intake as well as a 24 hour urine collection test to determine how much iodine is being excreted is one way to measure your potential for deficiency or toxicity.

Focus on Natural Foods that Contain Healthy Amounts of Iodine

The easiest way to avoid iodine toxicity is to simply focus on eating a naturally healthy diet that contains healthy amounts of iodine.

However, the topic of a truly healthy diet is quite complex as there are many other factors aside from iodine content that are important in improving and regulating metabolism and thyroid function.

Want to learn more about what’s required for a truly healthy thyroid diet?

Check out this simple and easy to follow step-by-step plan to jump-start your thyroid.

The bottom line is… myths are everywhere, so don’t blindly believe everything you hear.

Avoiding iodine supplements, iodized salt, and other foods that are abnormally high in iodine is a necessary and important step in avoiding iodine toxicity and properly regulating thyroid function.

Blindly taking an iodine supplement when you’re not deficient, or over-consuming super-foods that aren’t so super… can become an accident waiting to happen.