How to Accurately Test for Estrogen Dominance (Without Testing Estrogen)

Want to know if you’re estrogen dominant, and whether or not it’s suppressing your thyroid?

Well, regardless of whether you’re male or female…

…if you suffer from hypothyroidism or Hashimoto’s, then it’s pretty much a sure thing.

Yet, I want to show you a way you can test this for yourself.

Now, if you’ve had your estrogen levels tested by blood, saliva, etc., then you might as well toss your lab results into the garbage.

The problem with your typical estrogen labs is that they only account for estrogen in your bloodstream.

What they fail to measure (and what’s more important) is the amount of estrogen within your tissue and cells.

Standard estrogen labs can’t tell you this, and that’s a BIG problem.

This poses a major problem for women receiving estrogen treatment based on blood labs.

Just imagine how much hypothyroidism and Hashimoto’s thyroiditis has been caused, or worsened directly by unnecessary HRT (Hormone Replacement Therapy)?

Imagine how many breast cancer cases could have been avoided?

So, much unnecessary pain and suffering could be avoided by simply using a more accurate test.

I’ll share that test with you in just a second.

But first, it’s always important to account for symptoms (and thyroid testing) when interpreting any lab results.

(NOTE: I walk you through exactly how to properly interpret your thyroid labs and show you exactly how you can test your thyroid function more accurately than any lab test in this Ultimate Thyroid Testing Protocol.)

Estrogen dominance is quite complex because estrogen has so many far-reaching effects on thyroid function, metabolism, and a multitude of other hormone levels.

If you’re a woman with a menstrual cycle, sometimes we can better gauge which symptoms are directly related to estrogen dominance because they worsen at specific times of your menstrual cycle.

In fact, that’s a question I ask all of my relevant female clients.

This one question alone can provide a lot of information regarding estrogen status.

You would be amazed at how many women don’t correlate their symptoms to their menstrual cycle until they stop to think about it.

Below are some common estrogen dominance symptoms:

If you suffer, or have suffered, from any of the above symptoms, then you’re likely more estrogen dominant than you may think.

How to More Accurately Test for Estrogen Dominance

…in order to more accurately test for estrogen dominance, we have to look for another indicator of estrogen levels where blood and tissue levels do match.

One hormone with matching blood and tissue levels, which can also be used as an indicator of estrogen levels is the hormone… prolactin.

Prolactin is a hormone secreted under stress, and is most widely known for its ability to draw calcium from bones (when calcium is deficient) in order to provide adequate calcium for breast milk production.

[Metabolism of thyroid gland cells as affected by prolactin and emotional-physical stress].

“A conclusion has been made that one of the most important mechanisms of the adaptive effect of PRL is its ability to suppress thyroid function, thus decreasing the metabolism level, which results in reduction of oxygen consumption and improves body tolerance to stress.”

Also, like estrogen, not only is prolactin increased during hypothyroidism and stress, but it also increases in both men and women with aging. 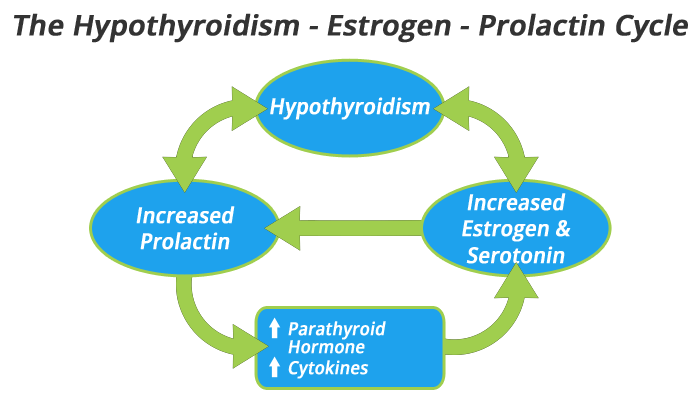 The simplified diagram above shows how in hypothyroidism estrogen and prolactin tend to increase together (along with parathyroid hormone and serotonin).

Hypothyroidism, estrogen, and serotonin all increase the production of prolactin.

As mentioned earlier, prolactin can be accurately measured from the blood, and tends to increase in proportion to estrogen tissue levels.

So, we can oftentimes get a more accurate indicator of true estrogen tissue levels by simply measuring your blood level of prolactin.

This is a simple blood draw test that is underutilized by doctors today, mainly due to poor interpretation of the lab itself.

Like many lab tests (including thyroid labs), the reference range for prolactin isn’t quite accurate.

Some hormone researchers, like Dr. Raymond Peat, state that prolactin must be low in order to achieve healthy thyroid function and metabolism.

Below you can find the recommended “healthy” ranges for prolactin.

When it comes to testing for estrogen dominance, I would highly recommend you have your doctor run a test for prolactin.

You can do this the next time you’re due for thyroid labs and routine bloodwork. Vitamin D should be added as well.

Hopefully this helped you better understand some of the intricacies of blood tests and why some tests that you and your doctor may depend on may actually be highly inaccurate.

Another great example of this is your thyroid labs.

Thyroid labs are known to be highly inaccurate and misleading.

Much like testing for prolactin, this protocol will help prevent you from making potentially dangerous mistakes with your thyroid health.

Yet, unlike testing for prolactin, this testing protocol can be done at home and for free. So, it won’t cost you a dime.

You can access this free training by clicking here.