Who would think that health foods could be so dangerous?

It’s the unfortunate truth… and I’ve been watching it get worse year after year.

I would even go as far to say this…

You would likely be better off avoiding all health food claims you find in magazines, on TV, or spread all over the internet.

That’s the nutritional information my clients are hearing from their doctors.

It’s a travesty to say the least.

Yet, it’s also easy to see how much of this misinformation spreads like wildfire.

Phytoestrogens are estrogen-like compounds produced in varying amounts by plants/foods.

Their structure is very similar to estrogen and research shows that they can weakly mimic the actions of estrogen in the body.

Now, keep in mind, most plants/foods contain an almost negligible amount of phytoestrogen.

So, in small amounts they aren’t necessarily harmful.

Yet, what’s most concerning are the foods that contain large amounts of phytoestrogens.

These foods can be quite estrogenic and have a cumulative negative effect on your thyroid health.

(Note: Want to learn more about the negative effects of estrogen on your thyroid health? Take a look at this article on hypothyroidism and estrogen.)

Before I jump into the four phytoestrogenic foods, I think it’s important to understand why there is so much controversy on this topic.

Much of the phytoestrogen research is mixed.

Some studies suggest that phytoestrogens have cancer protective properties, while others show that they stimulate cancer growth.

Endocrine expert, Dr. Raymond Peat, points out that many phytoestrogen studies claiming their benefits are flawed.

“For over fifty years, it has been known that the liver excretes estrogens and other toxins from the body, and that when (because of liver inertia) estrogen isn’t excreted by the liver and kidneys, it is retained in the body. This process was observed in both animals and humans decades ago, and it is also well established that estrogen itself suppresses the detoxifying systems, causing fewer carcinogens to be excreted in the urine. Ingram’s evidence logically would suggest that the women who have cancer are failing to eliminate estrogens, including phytoestrogens, at a normal rate, and so are retaining a higher percentage of the chemicals consumed in their diets.”

Yet, both estrogens and phytoestrogens have been shown to block the estrogen detox pathway, which is a major problem.

When the liver’s estrogen detox pathway is blocked, then it can’t excrete phytoestrogen into the urine.

So, many subjects whose urine tested lowest in phytoestrogens likely had higher phytoestrogen levels in the blood… which could correlate with higher cancer rates rather than lower.

But that’s not the only problem.

This is likely due to estrogen’s effect of stimulating the thyroid-suppressive hormone prolactin.

Yet, when looking specifically at the thyroid and phytoestrogen research, the picture becomes even clearer.

One study on subclinical hypothyroidism patients (no symptoms) showed a 360 percent increased risk in developing overt hypothyroidism, with increased TSH and reduced T4 levels.

Another study on healthy non-hypothyroid subjects showed half of the subjects developed hypothyroid symptoms within the 3 month timeframe of consuming soy.

These symptoms disappeared after 1 month of removing soy from their diet.

So, now that we’ve established the thyroid suppressive effects of phytoestrogens…

…let’s take a look at the 4 worst phytoestrogen “health foods” that you may think are healthy but are really sabotaging your thyroid health. 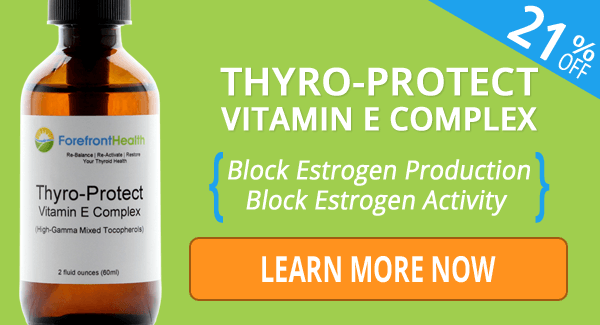 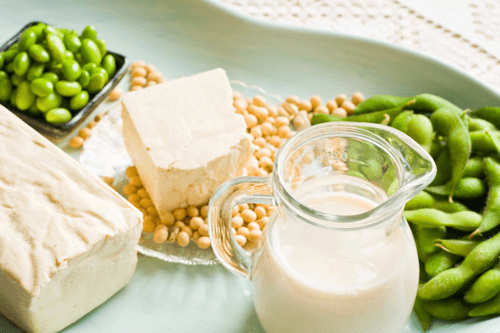 Soy products are often recommended to peri-menopausal and menopausal women as a way to increase their estrogen levels.

This is a big misnomer.

While it can improve some menopausal symptoms, it does so in dangerous ways.

As per the studies mentioned above, it can also severely suppress your thyroid.

Just like estrogen hormone replacement therapy (HRT) has been shown to increase risk of breast cancer, soy phytoestrogens can too.

While soy doesn’t win the award for the most estrogenic food, it does take the cake in sheer number of different estrogenic products.

Of all products derived from soy, all contain very large amounts of phytoestrogens, except one.

This includes (each measured per 100 grams of food): 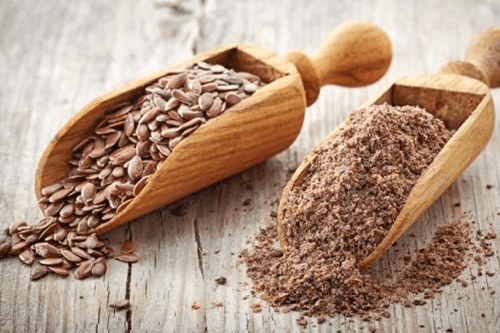 I am amazed at the number of people I see using flax seed, flax oil, flax breads, and other flax based products.

Often touted as a great source of omega-3 fatty acids, many have been led to believe that flax seed protects against heart disease.

Yet, have you ever looked at the actual research?

I’ll reference you to a prior article I wrote called “The Truth About Omega 3, Fish Oil and Heart Disease“.

Flax seed takes the cake when it comes to total phytoestrogen content of 379 mg per 100 grams of flax.

Like soy, many peri-menopausal and menopausal women are also dangerously led to using flax.

Again, this is because doctors tell them that they need to increase their estrogen.

Even in menopause, your body can produce large amounts of estrogen through the aromatization pathway.

It’s progesterone that is really needed and that your body is far less capable of  producing. 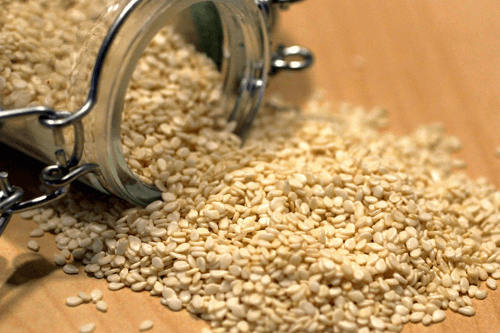 Another seed shown to contain a large amount of phytoestrogens is sesame seed.

Sesame seeds are often claimed to help protect against cancer and diabetes.

They are often cited to improve bone health and lower inflammation.

Well, they’re note quite as estrogenic as flax seed, yet sesame seeds contain 8mg of phytoestrogens per 100 grams. 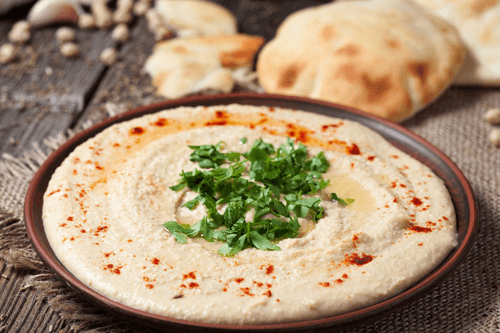 Sometimes referred to as the “superfood dip”, hummus has many claimed health benefits.

For starters, it contains iron which is believe to alleviate anemia.

(NOTE: This is a big problem for hypothyroidism sufferers, which I plan to be the topic of our next blog post.)

(NOTE: Lowering cholesterol through food and medication is not recommended as covered in this article on “How to Lower Cholesterol Naturally”.)

Sure, it does contain some beneficial Vitamin E and Vitamin K…

…yet, hummus takes the fourth spot at 1 mg of phytoestrogen per 100 grams.

Now, it’s important to keep all of these amounts in perspective.

For example, sesame seeds and hummus might appear to contain little phytoestrogen compared to flax and soy.

Yet, when you compare them to other foods low in phytoestrogens, it paints a very different picture.

To give you perspective, the phytoestrogen content of most foods are almost miniscule.

In a world where there are so many threats to our thyroid health, we have to take advantage of every opportunity we can to protect ourselves.

Avoiding these truly estrogenic and thyroid-suppressive foods is one easy way to do just that.